All over the world, the inhabitants of many countries are associated with a particular vegetable which is considered typical of that country. In Italy it is the tomato, in France the artichoke, in England peas, in Germany potatoes, in Poland cabbage. If you ask about a typically Spanish vegetable, you are sure to hear mention of red pepper. This is quite a stubborn prejudice. What is actually the most appreciated  are white sticks – it means asparagus. The approximately 30-centimetre-long sticks grow in the earth, once it warms up in spring. Asparagus is proof that winter is finally over. The farmers call it “white gold”.The asparagus enthusiast will pay up to 9 Euros and more for a kilo of good-quality asparagus.

The Romans brought asparagus with them to Spain, along with wines. Later, this noble vegetable was mainly cultivated in monasteries or grown as a medicinal plant. The Greek doctor Hippocrates swore by asparagus, as a medicine that purged the body. The Romans adored the green variety; it was part of every festive meal and even gave rise to a dictum: something that had to happen quickly had to be done “faster than it takes to cook asparagus”.

What is served today as white or pale asparagus is more an invention of the modern era. When it was discovered that asparagus maintains its white color if protected from the sun’s rays by soil, small mounds of earth were formed which covered the plant’s shoots as they developed. Temperatures of 12 degrees are sufficient for them to ripen. Everywhere where dry sandy soil allows its cultivation, you will see the long rows of mounds in spring, often covered in black plastic so that the sun’s rays can better heat up the soil. Although asparagus is cultivated all over Spain, certain regions are regarded as major asparagus-growing centres: Navarra and La Rioja. Water is a keyword here: 93% of asparagus is water; all the rest is carbohydrates and proteins. And because it has practically no fat, it does not make you put on weight. It owes its particular tart flavour to the amino acid asparagine.

Is it the shape that accounts for asparagus supposedly having an aphrodisiacal effect? Although there is no scientific evidence for this, it did not stop the world-­famous Comedian Harmonists from singing a 1930s song about spring, which is still popular today: “The whole world has lost its head, the asparagus is growing” – two lines that are understood by everyone.

The secret of asparagus is its freshness: it must be on your plate no more than a few hours after being harvested. It cannot be stored. For this reason shortly after the harvest, it is canned, to enjoy its incomparable flavor all year round. 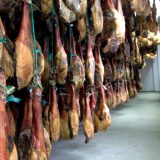